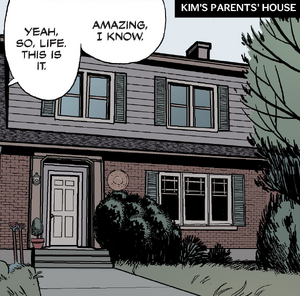 Kim's Parent's House is the residence of Kim's parents. This is seen in Book 6, when Scott travels to visit Kim to help clear his mind. It is presumed Scott stays there for the time being.

Later, Kim leaves the house with Scott to go to a nearby wilderness sabbatical, where Scott tries to rekindle his relationship with Kim. However, Kim grossly rejects, leading to Scott having The Glow and fighting his evil double-self, NegaScott. After purging his mind, Scott returns to Toronto to face Gideon.

Given a few key bits of evidence such as the architecture of the house, the look of the surrounding area, and the time it takes Kim to get there by bus, the house is most likely located in the suburb of Lo-Ellen in Sudbury, ON.