Knives Chau is a 17-year-old (18-year-old in Volume 6) Chinese-Canadian high school girl and self-described "Scottaholic" (though she later gets over him). When Knives dates Scott, she is happy-go-lucky, but when he cheated on her (initially "forgetting" to break up with her), her personality drastically changes. After he "grows up" and reveals that he showed an interest in Ramona, he breaks up with Knives and she comes to terms with it. She is the secondary antagonist of the entire series.

When she dates Scott, she is initially a quiet, typical school girl. However, when she finds out he is cheating on her, she becomes bitter, obsessed, and jealous. Knives cuts and dyes her hair then changed her clothing style; she hopes to win Scott back by becoming more of a hipster and more "cool."

She dates Sex Bob-omb's other groupie Young Neil, although she is still hung up on Scott. She and Young Neil later break up, but Knives still hangs out with the group, and by Volume 5 had seemingly developed a mutual attraction to Stephen Stills. This, however, was proven to be false at the end of Volume 6 with the realization that Stephen had been dating Joseph. Later in the series, she reaches a level of acceptance with Ramona.

She used to idolize Envy Adams, based on her success as a musician and her former relationship with Scott but is soon disenchanted when Envy has her drummer Lynette punch Knives hard enough to knock the highlights out of her hair (although even afterward Knives couldn't bring herself to hate Envy's music.) Knives' father becomes aware of Scott's past relationship with his daughter, causing him to hunt him down and try to kill him, though Scott later earns his acceptance.

Knives Chau was born seventeen years before the start of the series of Chinese-Canadian descent. Her life in high school is very lonely and her mother nagged her to find someone to fall in love with, as the prospect simply did not interest her. During one such argument on a bus, she met Scott Pilgrim and began dating him. Scott was probably the only thing about her otherwise boring and ordinary life that truly made her happy, and as a result she became obsessed with him. She would occasionally come over to see his band, Sex Bob-omb, play.

Unfortunately for her, Scott broke up with her after he met Ramona Flowers (though he initially "forgot" to break up with her). This outraged her and she cut and dyed her hair and changed her clothing style and becomes bitter, obsessed and jealous. She hopes to win Scott back by becoming more of a hipster. Her discovery that Scott was cheating on her with Ramona causes tension between the two girls, sometimes culminating in actual fights, though later the two reach a level of acceptance of one another.

She starts dating Sex Bob-omb's groupie Young Neil, although she is still hung up on Scott. She and Young Neil later break up, but Knives still hangs out with the group, and by Volume 5 had seemingly developed a mutual attraction to Stephen Stills, however, this was proven to be false at the end of Volume 6 with the realization that Stephen had been dating Joseph.

She used to idolize Envy Adams, based on her success as a musician and her former relationship with Scott but is soon disenchanted when Envy has her drummer Lynette punch Knives hard enough to knock the highlights out of her hair (although even afterward Knives couldn't bring herself to hate Envy's music.) Knives' father becomes aware of Scott's past relationship with his daughter, causing him to hunt him down and try to kill him, though Scott later earns his acceptance.

Scott and Knives met on a bus when Scott helped her pick up a stack of books she dropped while traveling home with her mother. Despite her being 17 and Scott being 23, the two have no problem with the age difference since nothing seems to happen between them apart from Knives talking about her day and Scott listening. Eventually, she's invited to a practice session of Scott's group Sex Bob-omb and after hearing "LaunchPad McQuack" (which is not the name of the song), is addicted to them, and Scott.

Scott becomes more distant from after Ramona shows up, but Knives is too blinded by her affection for him and continues becoming more infatuated by him, eventually kissing him (which Scott is totally freaked out by). Knives becomes more and more enamored and affectionate with Scott until he decides to break up with her at the start of Volume 2. Stalking Scott for several days, she learns of Ramona and immediately assumes Scott was cheating on her, but only because she thinks that Ramona put him under some sort of spell. She viewed her as the enemy she must defeat to win Scott back.

Knives and Scott's relationship is complicated in more than a few ways. Her primary feelings towards him are infatuation, but she proves to be mature for her age when she protects Ramona in volume 3 from Envy, stating she just wants him to be happy. Despite how everyone else views Scott, Knives loves him unconditionally. However, in Volume 5, she and Ramona fought each other once more. The fight ended when Knives decides to tell her that Scott had cheated on them both, an assumption that Ramona tried to ignore until later on.

In Volume 6 during Ramona's disappearance, Knives declared that while she won't stop loving Scott, she finally decided to move on, not wanting him anymore. When she said that it would be cool if they make out for a while, they both kissed. For some reason, however, the end result was a "horrible feeling" for them both (and even the reader). After the defeat of Gideon, when they said their goodbyes at the end of the series, she tells Scott "You'll always be my The Clash At Demonhead" (Though he has NO IDEA what she's talking about) before hugging him and departing for university.

For her obsession, Knives is viewed along with Envy, to be one of Scott's Evil Exes (really because she attacked Ramona twice).

Knives and Stephen have gotten close as the novels went on, they are seen talking to each other a lot during parties. In Volume 4, Julie suspects Stephen and Knives may have a mutual attraction to each other but over time she apologizes to Stephen and Knives for acting the way she did. Later on in the novels, Knives appears to be almost obsessed with Stephen. All though nothing romantic did ever happen between them, they still remain very good friends.

Knives and Ramona have clashed several times and appear to have a kind of love/hate relationship centralizing around Scott. In volume 2, Knives attacks Ramona at the Toronto Reference Library with (surprise, surprise) a set of knives. Ramona assumes she's an assassin sent by Gideon, but she shrugs that off and declares herself a "Scottaholic." Ramona proves to be more than a match for Knives, however, and easily repels her attacks. The melee ends with Knives leaving Ramona a note on a knife blade reading "You're ugly, and I hate you" after learning Scott really did cheat on her with Ramona.

In volume 3, Knives, now dating Young Neil because he looks like Scott, protects Ramona from being smashed with her own hammer by Envy stating "I just want his happiness" when asked why.

In volume 5, she attacks Ramona in the bathroom and reveals Scott cheated on the pair of them in a brief skirmish which Ramona walks away from.

Knives and Kim have very little known dialogue before volume 4. Despite this, Scott catches both of them, drunk, making out in Julie's aunt's house at the beginning of the book after Knives says "I've kissed the lips that kissed you" (this is later referenced in the Game through Kim's ending and Knives' assist for her). This is the same thing she said to Envy in volume 3 and even in the Film. Whether or not this was the last thing said before the make out is up to speculation.

This is also interesting as Kim initially didn't like Knives and even said she was "biting her style" by dressing like her. Given this, her relationship with Young Neil, her prior relationship with Scott, and how later she hangs around Stephen Stills a great deal (as Young Neil points out in volume 5), Knives is something of a groupie for Sex Bob-omb.

Knives is a capable and agile fighter, although she is easily outmatched by Ramona. Knives usually and appropriately uses knives in battle as both melee and throwing weapons. Knives appears to have a large supply of these weapons as she is always seen with at least two of her knives despite throwing some of them. Knives can throw these knives from a great distance and with great force.

In vs. the World Edit

Knives Chau is played by Ellen Wong whose previous works include roles in Runaway and This is Wonderland. She tried out three times, and director Edgar Wright later found out after the second audition that she was a green belt in tae-kwon-do. They brought her back in, got her to do some high kicks and the like, and cast her in the role.

The original ending had Scott end up with Knives, with Ramona complimenting Knives's obsession over him while talking to Scott in the dream desert. In the end, Ramona leaves through a subspace door, and Knives and Scott continue their traditional routine of playing Ninja Ninja Revolution. This alternate ending is available as a deleted scene on the DVD.

Knives is considerably powerful, as she is seemingly evenly matched with Ramona, who "kicks all kind of ass" according to Stephen Stills.

In the Game Edit

Knives is an assist character in the game and can be used by all the characters, each with their own effect. When Scott calls her, she jumps in and sprouts the word "LOVE" in puffy cloud-letters, which stuns enemies briefly. Ramona Flowers' version has her appear in a barista's uniform holding a huge cup of coffee, which restores a little bit of health and makes her hyper. Stephen's version has her throw over sized daggers at the enemies. She assists Kim Pine by kissing her, which restores health and stuns nearby enemies (excluding robots) Negascott can call NegaKnives, a dark version of Knives that cuts down enemies before leaping off-screen. Knives also appears in Scott, Kim and Negascott's endings. Wallace (Who is also a DLC character) uses the same assist as Stephen.

Knives was released as a downloadable character on November 9, 2010. As a playable character, some of her moves are very similar to Kim's (most likely a reference to how Knives was "cramping [Kim's] style"), but she has a spin kick and the ability to throw explosive knives. Her striker is Mrs. Chau, who will shout profanity in Chinese at the enemies.

Knives instantly becomes infatuated with Scott after hearing his music

Knives confronts her idol with some provocative words 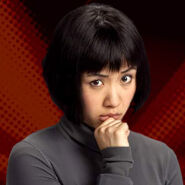 Add a photo to this gallery

She's kissed the pixelated lips that kissed them. 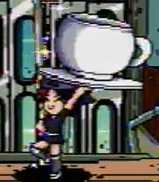 Ramona's Knives assist.
Add a photo to this gallery

We kiss "his" Lips 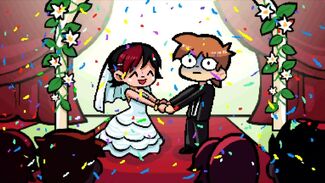 It was their wedding day! Knives looked lovley in her gown. All of Scott's friends were there to see... Scott was very confused... (Knives ending in the Video Game)
Add a photo to this gallery

"Oh my God! He's dating a fatass hipster chick! I hate her stupid guts! He only likes her because she's old. She probably like 25! She's just some fatass white girl, you know?!"

"Steal my boyfriend, taste my steel!"

Retrieved from "https://scottpilgrim.fandom.com/wiki/Knives_Chau?oldid=29705"
Community content is available under CC-BY-SA unless otherwise noted.