The League of Evil Exes is a loose association of villains who used to date Ramona Flowers before she met Scott Pilgrim.

They are the main antagonists in the series, and their one and only goal is to interfere and control Ramona's love life, making Scott a primary target. According to Ramona, Scott has to fight (and defeat) all seven Ex's to continue dating her. Whether from Ramona herself or the League, Scott learns of each Ex's past relationships with her.

The League was formed when Gideon Graves, after being left by Ramona, posted a drunken rant on Craigslist. The other six exes responded to the rant, and Gideon used this situation to take his "revenge" on Ramona.

Each Evil Ex is surrounded by their number of appearance in the comics, the film and the game.

Matthew's Game Appearance
Add a photo to this gallery

A former boyfriend from the seventh grade. Ramona Flowers and he dated for only a week and a half, during which Ramona pretty much used Matthew and his mystical powers to ward off flocks of jocks interested in her. She dated Matthew, according to her own story, because he was the only non-white and non-jock kid at her school. The two only kissed once, and it ended shortly after due to Matthew's pre-adolescent capriciousness. Afterward, Matthew turned evil during his high school years and by that time had moved far, far away. He also apparently took the break-up very badly, looking much more evil than most of the exes. 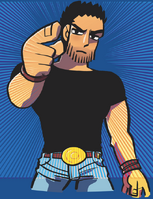 Lucas' Game Appearance
Add a photo to this gallery

Ramona and Lucas Lee started dating during their freshman year in high school together. Around that time Lucas Lee was, according to Ramona, a "whiny little greasy-haired skater." Prior to the relationship Lucas followed Ramona around and constantly asked to go out with her. Eventually Ramona said okay and the two went out for a short while. Although Lucas Lee claims he was an important figure in Ramona's past, he lacks any real relevance in Ramona's life; According to Ramona, all they really did was sit together on a street curb and smoke. At some point in the relationship Ramona cheated on and left him for the "first cocky pretty boy".

Todd's Game Appearance
Add a photo to this gallery

Todd knew Envy since they were eleven as they grew up together in Montreal. The two shared (in Envy's opinion) a deeply loving relationship until Todd's family moved away. Ramona dated Todd for the remainder of high school after she left Lucas Lee, saying they were the "bad kids" together. He vanished for two weeks while they dated, during which he went vegan and gained his telekinetic powers (having apparently been studied by scientists). Todd returned and took Ramona out of class to prove his love for her by blasting one of the two craters in the moon.(causing what Ramona described as "About 30 pages of explosions and tidal waves.") Todd ended up going to a vegan college while Ramona went to the The University of Carolina in the Sky, though, so the two decided to call it quits.

Roxie's Game Appearance
Add a photo to this gallery

Ramona's university roommate and the only ex-girlfriend. She explains that their relationship was just a phase she went through. After post-secondary, they broke up and hadn't seen or heard much from one another.

It is known that Ramona used to date both of them at the same time, but without each knowing about other (basically cheating on both of them). When the truth was revealed, the twins had sworn to always do everything together from that moment on. There seems to be no hostility between the two considering their former relationship with Ramona. They seem to place the blame solely on her.

Gideon first met Ramona at a party in New York and the two quickly formed a relationship. Despite Ramona's feelings for Gideon, Gideon saw his relationship with Ramona purely as an experiment, during which he inflicted Ramona with The Glow. Fed up of him constantly pushing her away, Ramona decided to leave Gideon, leaving nothing except a letter. Unfortunately for Ramona, Gideon walked in on her just as she finished the letter. Ramona, filled with intense emotions, became overwhelmed by The Glow and vanished into Subspace, taking the letter with her. After Ramona left, Gideon got totally wasted out of his mind and put up a huge drunken rant on Craigslist about her. This got the attention of Ramona's other six evil exes who contacted him, thus forming the League. 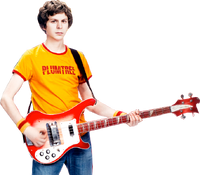 Scott's Game Appearance
Add a photo to this gallery

While not an Evil Ex himself, Scott is shown to have the potential to become one, with Ramona outright stating at one point in Volume 5 that he's "just another evil ex waiting to happen." In Volume 6, Gideon even asks Scott to join the League (which Scott refuses). To represent this, Scott is sometimes associated with the number zero.

Retrieved from "https://scottpilgrim.fandom.com/wiki/League_of_Ramona%27s_Evil_Exes?oldid=29422"
Community content is available under CC-BY-SA unless otherwise noted.