Ninja Ninja Revolution is an arcade game played by Scott Pilgrim and Knives Chau twice in the Movie. It is an obvious parody of Dance Dance Revolution. Scott and Knives appear to be really good at it and during the final fight with Gideon Graves they use moves from the Game against him thus defeating him.

Game-play involves moving in several directions and performing poses to avoid other ninjas and fight them. The boss of the game is NegaNinja (whom Scott claims he cannot defeat) which foreshadows the fight with NegaScott. It is played twice in the Film, the first time at the two's date where during game-play Scott

speaks of Pacman's creation and renaming, the second time is after Scott met Ramona Flowers where he lazily plays it, losing every time. At the end of the Film, a continue screen from the game pops up counting down until you want to play again and goes to credits after going down to 1. It was going to appear a third time in the film, in the alternate ending, in which Scott and Ramona go their separate ways, while Scott and Knives are seen playing the game afterwards.

It is also referenced in the game referred to as "Ronin Ronin Revolution". The animation for the game was by Blur Studio Inc. 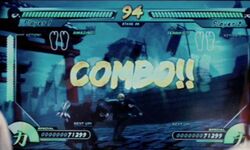 Scott lazily plays the game with Knives after seeing Ramona at Julie's party.

Scott and Knives playing Ninja Ninja Revolution in the alternate ending of the film
Community content is available under CC-BY-SA unless otherwise noted.
Advertisement