Roxanne "Roxie" Richter (sometimes spelled "Roxy") is Ramona's fourth Evil Ex and the only ex-girlfriend. She was born on the moon and is also half-ninja. She dated Ramona while they both attended The University of Carolina in the Sky.

She's the final boss of Scott Pilgrim Gets It Together

Ramona's university roommate and the only ex-girlfriend. She alleges that their relationship was just a phase she went through (or as Scott puts it, a 'sexy phase'). After post-secondary, they broke up and hadn't seen or heard much from one another.

Roxie attacks Scott one night after he was heading home from his first day at work. Scott narrowly avoids her attack then manages to hit her in the breast, much to her fury and his chagrin (he didn't know he was fighting a girl and is usually against it). She retreats after that promising they'll meet again.

Scott later sees her talking to Ramona when the two are having lunch at The Happy Avocado where he works and interrupts their conversation. It is then that he realizes Roxie is the next Evil Ex he is meant to fight. A label is shown that says "Roxie Richter Fourth Evil Ex-boyfriend," infuriating Roxie, who proclaims that she's not a boy. Ramona fights in Scott's place (as he claims he doesn't have a sword) using a Titanium Baseball Bat and Roxie chases after the two, following them into Subspace though they manage to elude her. She later invades Scott's dream and attacks him there, even cutting off an arm but he wakes up before Roxie can finish him. Sometime around this point she crashes at Ramona's house which Scott finds out after escaping from Mr. Chau. Scott manages to lure Mr. Chau into fighting Roxie (with her thinking Gideon sent him). But when Roxie calls Scott "a pussy" and Ramona backs up her statement a little, Scott gains the courage to take her on and tell Ramona that he is in love with her, earning himself the sword, the Power of Love.

Scott and Roxie then face off in Ramona's back yard where he manages to slice Roxie in half in style reminiscent of the Ninja Gaiden cutscene, causing her to explode into cute little animals like the ones from Sonic the Hedgehog. (Note that she is the only member of the League not to give Scott any kind of money upon her defeat).

Roxie could move at near-ninja like speed, attaining a velocity where she became visible to the human eye only as a black blur. She was able to travel through Subspace, having taught Ramona everything she knew. Both she and others repeatedly bring up that she is not a ninja, only "half-ninja", though the details are not explained. It may be that only one of her parents was a ninja, or that she never fully finished her training. Roxie is also capable of teleportation, and can disappear in a cloud of smoke. In the movie, she can become invisible. The Free Scott Pilgrim comic also implies that she can magically turn movie posters into "Ninja Scrolls".

The first time she attacked Scott she was very mad because he punched her in the boob. Roxie has an inferiority complex over her appearance and her "half ninja" background. She also enjoys taunting Scott. Roxie is also an accomplished artist, and she had an art show in a local gallery somewhere in Toronto. Ramona was thinking of attending; however, Scott defeated Roxie before the show opened. She also seems to be very descriptive, since she is seen using a lot of personifications.

Of all the evil exes, Ramona and Roxie seem to have the best relationship and hold the least animosity when Roxie isn't trying to kill Scott. In fact, judging from her dialogue the first time she and Ramona appear together, her reason for wanting to kill Scott is not just a desire for revenge against Ramona; she apparently seeks to kill Scott because she believes that he's "obviously" cheating on Ramona with Lisa Miller. When Ramona hid Scott in her bag and fled into Subspace, Roxie did not want to hurt the former and let them go, giving Scott a day to prepare for their duel.

Mae Whitman plays Roxie (known as Roxy) Richter in the movie. Mae has worked on Independence Day, Parenthood, Nights in Rodanthe, Avatar: The Last Airbender, Boogeyman 2, American Dragon: Jake Long, Johnny Bravo, Teenage Mutant Ninja Turtles, The Owl House, and played Ann Veal on the TV show Arrested Development. (Mae's character on Arrested Development was, ironically, the girlfriend of Michael Cera's character.) Mae also does the voice of Lisa Miller in Scott Pilgrim vs. the Animation. Her credit at the beginning of the movie shows four 'x's, as she is the fourth evil ex, and also to represent a lesbian relationship (four X chromosomes). When Scott first encounters Roxy, she attacks him 4 times by flying by in a cloud of black smoke/mist before Scott "punched [her] in the boob." She then warns him that "next time, [she'd] be deadly serious next time." Later, after Scott fights Todd Ingram, Sex Bob-Omb goes to a club called "4", where Roxy then shows up to fight Scott. He doesn't fight her, and instead stands on the sidelines while Ramona does until she says that Scott has to defeat her with his own fists; in response, Ramona just gets behind Scott and moves his arms and legs to attack Roxy. While Scott doesn't attack violently, he does defeat Roxy when Ramona reveals that Roxy's weakness is being touched the back of her knees (which was Envy Adams' weakness in the novels). When poked, she loses all momentum and falls to the ground. In her final jab at Scott, she states that "you'll never be able to do this to her!!" right before climaxing into a pile of coins.

In the original draft of the film, "Scott Pilgrim's Little Life", Envy Adams was planned to be Ex Number Four.

Roxie is the fourth boss you fight in the game and is fought in World 4. As soon as you enter the stage, you meet her on a streetcar, where she dashes, jumps, and teleports away for much of the level before slicing off a part of the streetcar entirely and letting you crash in it, forcing you to give chase through a restaurant and garden stage.

She is by far the quickest boss and will slice repeatedly at you with her sword. What's more, her weapon is a whip-sword, switching between a solid blade, and a whip (à la Janne D'Arc's weapon from World Heroes and Ivy's weapon from Soulcalibur), allowing her to hit you from long distance. She will also create four clones of herself that will dash around the stage and attack you as well. If that wasn't bad enough, the ninja enemies, known as Hanzo, will join the fight as well if the battle had more characters on the field. It's very highly recommended you level up before facing her (Lvl 15 or above), as low experienced players will quickly be taken out by her. Likewise use the bamboo sticks provided as they do more damage than fighting barehanded will. Once defeated, her body slices in half and she explodes into cute little animals which you can pick up for money (altogether worth $24.95).

Rather than the black top she wears in Volume 4 and the movie, Roxie wears a dark pink top. Her Oni Press demon tattoo is also conspicuously absent (most likely for symmetry reasons).

"Back off, has-bian! If Gideon can't have you, no one can. The League has spoken!"

"Fight your own battles, lazy-ass!" 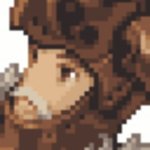