Scott Pilgrim vs. the Animation

In conjunction with Universal's release of Scott Pilgrim vs. the World, Titmouse, Inc. (producers of Metalocalypse) has animated the series of shorts for [adult swim]. They are voiced by movie cast members, and will elaborate on the Scott Pilgrim – Kim Pine "secret" origin.

Scenes from Bryan Lee O'Malley's graphic novels are also used, and Mae Whitman, who plays Roxie Richter in the movie, was called on to voice Scott's could-have-been high school flame Lisa Miller in the short. The animation notes that Lisa does not appear in the movie (although she was mentioned).

The song played throughout the short is "Post Acid" by Wavves.

Two clips from the shorts have debuted so far, one that shows Scott and Lisa's first meeting, and another that is a commercial for the animated special. The narrator from the commercial spot states: "Scott Pilgrim Vs. the World' is almost in theaters. If you don't already love it, you will. [adult swim] wants to marry it, so we made this animated short straight from the comic and put it on TV. This Thursday night around midnight, watch it. Then, see Scott Pilgrim vs. the World in stunning live-action August 13th, only in theaters. Win/win!"

According to [adult swim], they plan to put the short online at their website, and on Facebook soon after they air on cable - for those who do not have Cartoon Network, or may have missed it. 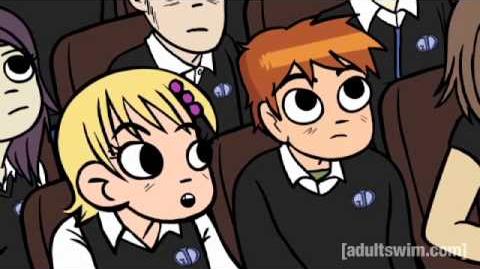 Scott Pilgrim vs. The Animation

"WE ARE SONIC AND KNUCKLES! ONE! TWO! THREE! FOUR!"

Scott kicks Simon so hard he sees the curvature of the Earth.