Cook at The Happy Avocado

Mark Webber / Óscar Flores (Latin Mexican Dubbing)
Stephen Stills is the lead singer, guitarist, and "talent" of Sex Bob-omb. He is 22 (23 in book 4 onward) years old and went to university with Scott Pilgrim at the University of Toronto, where he played in the band Kid Chameleon with Scott, Envy Adams, and others. He is currently employed at The Happy Avocado vegetarian restaurant as a cook and later helps Scott get a job there as a dish-washer. Stephen was in a tumultuous relationship with Julie Powers, who at one point suspects that he and Knives Chau may have a mutual attraction to one another, though he breaks up with Julie in Scott Pilgrim vs. the Universe and had been dating Joseph for a while by Scott Pilgrim's Finest Hour. Whilst typically laconic, Stephen is known for rare fits of neurosis, (typically over the quality of his band's music compared to others), as well as irritability (usually over Scott's absentmindedness). He is named after the musician Stephen Stills of the group Crosby, Stills, Nash & Young. For reasons unknown, Scott always refers to him by his full name.

In Sex Bob-omb, Stephen is referred to as "the talent" of the group by most everyone and acts as the group's lead vocalist and guitarist. In Volume 4 however, things change as while helping Kim Pine move into her new apartment with Hollie Hawkes and Joseph, and we learn Joseph has a vast array of recording equipment. Stephen is amazed by this and instantly asks Joseph to help them record an album which he agrees to, only because he finds Stephen attractive. The group eventually does record an album which spans several months of work, both Volumes 4 & 5, though the end product is only 17 minutes long. 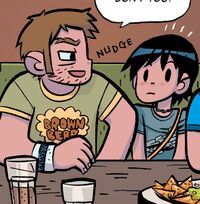 Stephen had a rather friendly relationship with Knives Chau, as seen in Volume 1, where he tells Scott that she "seems nice," even going on to say that he could also go for a high school girlfriend. However, he was very disturbed when his roommate Young Neil started dating her, thinking that she must've seduced him, and thus asks Scott if they should beat him up. By Volume 4, Julie suspected that he and Knives are having a mutual attraction to each other, thus taking a hostile approach on the teenager, but eventually apologizes to Stephen for her horrible attitude on Knives and him. Stephen breaks up (yet again) with Julie and starts hanging out a lot more with Knives, expressing concern on her unending devotion to Scott and annoyance at the latter's manipulative and womanizing ways. Young Neil goes on to say that Knives is obsessed with Stephen nowadays. Despite this, however, any relationship beyond their friendship was disproved, as seen in Volume 6, when Stephen started dating Joseph. Stephen and Knives didn't become a couple, but they remained good friends.

Stephen and Julie have a constant on-again-off-again relationship throughout the series. The two argue a lot over a variety of petty things, and when apart, Julie will do things to spite Stephen and everyone else such as booking Sex Bob-omb to unwanted shows, and dating Kyle & Ken Katayanagi of Ramona's Evil Exes. Despite this, the two always seem to patch things up, only to fall apart again, then to patch things up. Whenever the two break up, everyone seems to respond to this with the line "For the fiftieth time?" Stephen even wrote a song about his and Julie's relationship which she can't stand, despite Knives pointing out the song's underlying tenderness and message of love. Julie spent most of volume 4 being mad at Stephen, believing him to be attracted to Knives. Later on Stephen discovered that he was gay in the Fifth Volume, which was revealed to the readers (and Scott) in the final volume. During this revelation Scott stupidly/humorously asks if it was Julie's bitchiness that "turned" Stephen gay, much to the chagrin of Stephen and Joseph.

In the Final Volume, Stephen reveals he's in a relationship with Joseph, who had produced Sex Bob-omb's album. He tells Scott that he came out in Volume 5 but Scott seemed busy so he never mentioned it to him. Scott freaks out a moment while trying to stay cool before asking "So, Julie turned you gay?" to which Joseph suggests Stephen gets new friends. In Volume 4, Julie forgives Stephen for spending so much time with Knives, claiming that he could never leave her for a girl like that, at which point, Stephen nervously agrees, being the first implication of the possibility. Then, in Volume 5, Neil refers to Stephen as "Captain Homo," which would usually be a powerful indicator of the relationship, but was probably dismissed by Scott seeing as this was Neil during his more wayward phase.

Stephen Stills is played by Mark Webber whose previous works include 'The Memory Thief,' 'Snow Day', 'Winter Solstice,' and 'The Laramie Project.' While he plays a minor role in the film, he spends his time in music gigs worrying about how much his band will be AWESOME or HORRIBLY SUCK to the point Scott gets fed up with his crying and slaps Stills so he can relax (three times: slaps him once when they are about to perform in the Battle of the Bands, and twice in a row when they are about to do the music battle with the Twins). Even though Sex Bob-omb later found out the talent agent "G-Man" Graves was Ramona's 7th Evil Ex, he still accepted the contract for the band (with Young Neil replacing Scott as bassist) to play at his Chaos Theatre. He even peed his pants with joy upon hearing about the contract. At the end of the film after Scott has defeated Gideon and he explodes into 7,000,000,000 coins Kim says, "well there goes our (record) deal" and Stephen asks if "they are still getting paid," but Kim just repeats herself. Stephen begins frantically trying to pick up as many of the coins as possible. Like Kim and Young Neil, Stephen has a strained friendship with Scott up until the end of the movie, where Scott makes amends to all of them during his redo of his battle with Gideon Graves.

Stephen is one of four characters (seven counting the unlockable Negascott, Knives, and Wallace Wells available through DLC) you can choose from in the Game. When an area is cleared, Stephen exits the field by jumping into a green pipe (an obvious reference to the Super Mario Bros. series). In his ending, it states that "65,536 people cheered from the crowd!", a reference to video game consoles with 16-bit processors: the Super Nintendo Entertainment System/Super Famicom and Sega Genesis (65,536 is the highest number of values a 16-bit integer can hold). Also in Stephen's ending, Sex Bob-omb gets a million dollar record deal and money rains down from the sky but is suggested that it is just a dream. In Kim's ending, he and Scott are shocked when Kim and Knives become a couple. In Knives' ending, Stephen Stills and the rest of Scott's "friends" are at an altar to support a very confused Scott Pilgrim, as he marries his new wife, Knives Pilgrim.