The Vegan Police are an elite task force charged with enforcing the rules placed on those with special powers gained through practicing the Vegan diet. If a vegan is caught eating non-vegan food, they can make use of the "Deveganizing Ray" which will strip a powered vegan of all known abilities. The two who come to Scott's impeccably well-timed, yet - in Scott's own words - "poorly set up, last minute" (Deus Ex Machina-esque) rescue in volume 3 resemble Buddha and a hippie. They may also be a reference to the Final Fantasy VII characters Reno and Rude.

The original designs of the Vegan Police were drawn by Nathan Avery, as Bryan Lee O'Malley wasn't sure what direction to take with them. Bryan Lee admittedly "chickened out" of using the original designs, and simplified them, changing their appearance, but maintaining the basic elements.[1]

The Many Offenses of Todd[]

Todd Ingram, Ramona's third evil ex, and bass player for The Clash at Demonhead, had been watched for some time by the Vegan Police and had been seen consuming a variety of non-vegan foods including gelato (milk and eggs), and chicken Parmesan, as noted by Envy Adams when he was confronted later. Todd chalked this up to being "a rock star" and that he can do whatever he wants, but is strict ordinance with vegan rules: No vegan diet, no vegan powers. Todd was stripped of his powers by the Vegan Police, and subsequently headbutted by Scott into a pile of coins and an Extra Life.

In the movie, The Vegan Police have a 3-Strike rule which Todd breaks after drinking half-and-half (a standard but non-vegan coffee creamer consisting of dairy cream and milk).

Thomas Jane and Clifton Collins Jr. play the Vegan Police (uncredited) in the Scott Pilgrim vs. The World movie. The Vegan Police drive through a wall after Scott tricks Todd into drinking a coffee with half-and-half in it. The Vegan Police, aiming the Deveganizing Ray (in the form of a green light emitting from their index finger) at Todd. After naming his other offenses (Gelato and Chicken Parmesan, both of which Todd claims to have thought were Vegan), they then proceed to fire the ray, thus stripping Todd of his Vegan powers, to which Todd cries out in horror. After Scott headbutts and defeats Todd, the Vegan Police are seen walking towards their car and high fiving enthusiastically.

The Vegan Police appear in the Game while the player is battling Todd where they momentarily weaken him giving the player a chance to strike. 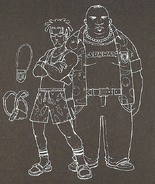 The original designs of the Vegan Police by Nathan Avery.

The Vegan Police's ride in the Movie